The AS8579 sensor offers the simplest way for car makers to comply with the UN Regulation 79, while giving the best detection performance

For automotive design engineers, it is unusual to find a new technology solution which performs better than existing approaches, and which reduces cost, and which is easier to implement in the application. But that is exactly what a new capacitive sensing chip, ams’ new AS8579, offers when used for hands-on detection (HOD) in cars which provide driver assistance functions.
It is the result of the application of a familiar and proven measurement principle – I/Q demodulation – to the job of sensing the position of the driver’s hands on the steering wheel. And it is markedly superior to any of the existing technologies in use for HOD in cars. Watch the highlights in our video:

The HOD function is required by the United Nations Regulation 79, and applies to all new cars that have a Lane Keeping Assist System (LKAS) wherever ratified. It has already been adopted by the European Union for new production vehicles from 1 April 2021. The purpose of the HOD system is to continuously monitor the readiness of the driver to assume control of the steering system in an emergency, or in the event of the failure of the LKAS.

Various technologies have been developed to provide this HOD function, but have had limitations: it is possible for drivers who want to avoid holding the steering wheel to fool the current monitoring system, which could compromise safety. And some existing solutions also perform poorly in certain operating conditions.

One approach to HOD has been the torque sensor: this detects the continual, minute deflections produced when the driver grips the steering wheel. The big drawback of this technology is that it can be easily fooled: the driver may take their hands off the wheel and ‘hold’ it by pressing upwards against it with their leg.

It is true that other technologies are already applied to other driver-monitoring functions. For instance, 2D optical sensing is in use in systems for monitoring the position of the driver’s head. However, these 2D optical-sensing systems are not capable of performing HOD. This means that capacitive sensing is the most viable technology for HOD that is ready for deployment today. And now ams has a new approach to capacitive sensing which will meet all the safety requirements imposed by the automotive industry, and which is simple to implement.

This new solution from ams provides better performance, and with fewer components than the existing charge-discharge technique for capacitive sensing.

By implementing reliable capacitive sensing based on I/Q demodulation, the AS8579 capacitive sensor performs HOD in a way which cannot be fooled. Like the charge-discharge method, I/Q demodulation is a proven and well-known technique for capacitive sensing. Its advantage is that it measures the resistive as well as the capacitive element of a system’s impedance. The effect of this is that, unlike the charge-discharge method, it works reliably in difficult conditions, such as in the presence of moisture, or when the driver is wearing gloves. And it cannot be fooled, so provides for assured detection of the driver’s grip on the steering wheel. And the added benefit of the AS8579-based solution is that it can operate via a heated steering wheel’s heater element, so it does not require a separate sensor element to be built into the steering wheel.

This is how the AS8579 eliminates the normal trade-offs in engineering design:

Ready for use in automotive designs

The AS8579 is fully automotive qualified, and offers multiple on-chip diagnostic functions, ensuring support for the ISO 26262 functional safety standard up to ASIL Grade B. Operating at one of four selectable driver-output frequencies – 45.45kHz, 71.43kHz, 100kHz or 125kHz – the AS8579 offers high immunity to electromagnetic interference.

Automotive designers can start developing with the AS8579 automotive capacitive sensor immediately using its dedicated evaluation kit, the AS8579-TS_EK_DB.

For more technical information or for sample requests, please go to capacitive sensor AS8579. 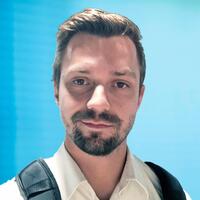 Andreas Zenz joined ams in 2013. Since then he has worked in application engineering for automotive, industrial, medical and robotics customers. In addition, he has taken on the product management role for the AS8579 automotive-qualified capacitive sensor.